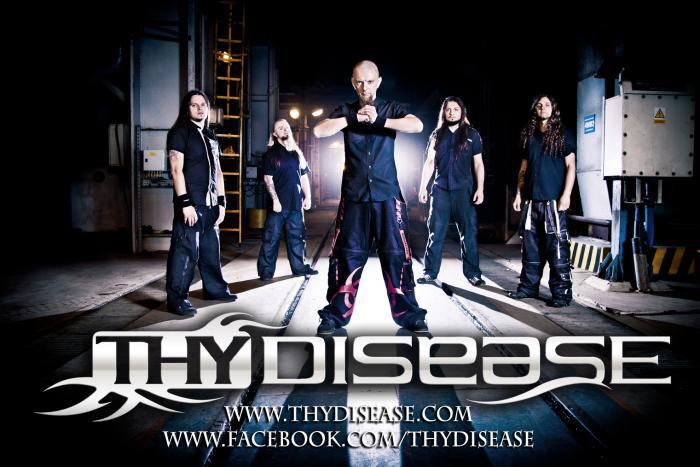 This Cracow-based extraordinary band is escaping the traditional metal cliches in an unconventional way very peculiarly mixing the extreme and modern art, treading upon the “electronic” heels of European trends. Its well-thought-out cybernetic music based on the ideas, which combine the concepts of Matrix and Armageddon, is very well received by fans and also gets superb media recognition. The material from the newest album “Costumes Of Technocracy” marked by a cult symbol of the Syndicate makes a perfect effect at live performances.

Biography:
Thy Disease was formed in 1999 in Cracow, Poland. The first demo called "Art Of Decadence" was recorded in December the same year. It consisted of four songs, which were composed by Yanuary. In December 1999 Thy Disease won the second prize on "Metal Millenium Party" - a metal contest for new talents in Cracow. After having composed music for the regular album Thy Disease concluded the contract with a Polish label - Metal Mind Productions and entered the studio. That contract guaranteed release of three LP's. In 2001 Thy Disease album called "Devilish Act Of Creation"was released.

The readers of Polish edition of Metal Hammer mag. voted Thy Disease the best Polish debut act. In a similar ranking and the same category in Mystic Art and Thrash'em All it hit the fifth and sixth position. In March 2002 Thy Disease gave a concert on Metalmania which is definitely the biggest Polish metal festival, along with Paradise Lost, Cannibal Corpse, Moonspell and Tiamat.

In September 2002 the second album "Cold Skin Obssesion" was released. The same month, along with Vader, Krisiun and Decapitated, Thy Disease gave a concert in Cracow TV studio. The gig was recorded and released as a DVD/VHS. The material called "Extreme Obssesion Live" includes few bonuses, like unpublished songs from the first demo or Vaders cover - "Sothis".

In the winter 2003 and 2004 Thy Disease was recording it's third album called "Neurotic World Of Guilt". The LP got very enthusiastic reviews in music magazines around the world. It was also the last album released for Metal Mind Productions.

In October 2005 Thy Disease signed a new deal with Empire Records which released bands fourth album "Rat Age (Sworn Kinds Final Verses)" in March 2006. Second half of 2006 brought many shows that band was performing in France, Belgium, Holland, Czech Republic or Ukraine. Thy Disease played also tours in Poland and Russia.

Currently Thy Disease is finalizing work on the fifth album entitled Anshur-ZA.

In 2007 during the “Metalfilia 2007 – Tour in Poland”, Thy Disease performed on the stage along with Virgin Snatch and other bands from Japan, Belarus, Dominican Republic, USA and Poland. In mid-2007 the Rat Age album was released globally, thanks to MMP, which resumed sales in Poland.
In 2008 the group started work on their next studio album. The recording session was featured by Wacław “Vogg” Kiełtyka, the leader of a well-known formation – Decapitated. Later that year the band also teamed up with Rafał Brauer, who took the place of a session bassist.
In 2009 Thy Disease signed a contract with the Mystic Production music label for three albums. On the 30th of November 2009 the bands 5th album called “Anshur-Za” was released.
In the beginning of 2010 Thy Disease went on a two-week tour across Poland with Virgin Snatch and Armagedon. The final concert took place in Cracow and was a celebration of the tenth anniversary of the bands formation. During the “Creative Act of Music 2010” tour the vocalist Michał Senajko was replaced by Sebastian “Sirius” Syroczyński, who cooperated with the band since 2005, replacing Psycho on various gigs. In April 2010, thanks to Indie Recordings, an European premier of “Anshur-Za” took place, while in July thanks to MVD, the album was released in USA and Canada. During that year the band has performed on stage ina few prestigious festivals, the most important being the Head Mission in Ukraine and Castle Party in Bolków (Poland).
In 2011 there have been some personal changes in the band, namely Sirius became the new official vocalist, Piotr “VX” Kopeć(Atrophia Red Sun) came to be the keyboard player, Marcin “Novy” Nowak the basist, while Paweł “Paul” Jaroszewicz became the new drummer. In this lineup the band has played a series of concerts in Poland and abroad, among others in Estonian “Hard Rock Laager 2011” (preceding Napalm Death and Rotting Christ), aswell as in Russia. The same year the band went on the “Contaminated Summer Tour 2011”, playing summer festivals and club concerts. At the end of the year Thy Disease played the “Eastern Conquest Tour 2011” visiting Belarus, Ukraine and Moldavia.
In the beginning of 2012 Thy Disease, along with many top polish bands, goes on a special tourcalled “Covan Wake the Fuck Up”, to help Adrian “Covan” Kowanekthe vocalist of Decapitated, seriously injured in a car accident during the bands tour. In springtime the band has qualified for the eliminations of the “Woodstock Festival 2012”. Out of 800 bands, Thy Disease has entered the first forty and then the very finals.In August the band entered the Creative Music Studio for a few months, to record the long awaited new album with their new members. Novy and Paul leave the band to be replaced by ArtyomSerdyuk (bass, guitar) and Irek Gawlik (drums).
At the end of 2012 Thy Disease go on a tour called “Frozen Plague Tour 2012/2013”. In meantime in December, the “Covan Wake the Fuck Up” DVD is released, containing pieces of the Cracow concert, which took place in January that year.
In the beginning of 2013 Thy Disease, along with Decapitated, Virgin Snatch and Sceptic, play a charity show in Cracow’s Rotunda, from which all the profits go to Covan and his family. Next few months abound in gigs in Poland and abroad (Slovakia, Hungary).
At this moment the “Costumes of Technocracy” album is ready, along with a music video.