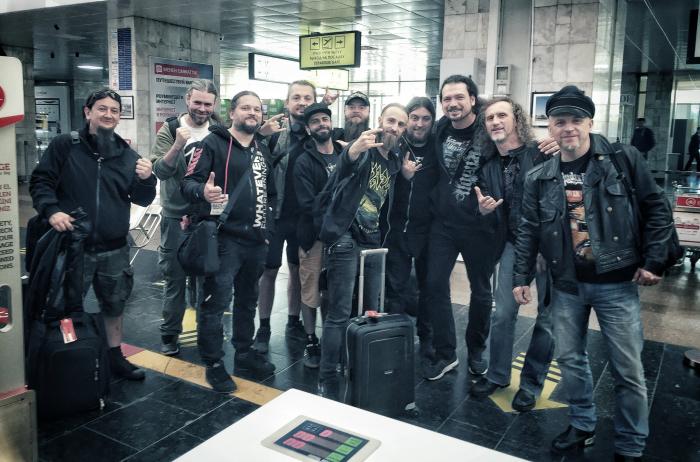 We’re finally back home after another adventurous campaign in the Eastern territories, as always pretty exotic including such countries as Georgia, Armenia, Kyrgyzstan and Turkey.

We regret to inform that unfortunately we could not reach Kazakhstan and also play the first show in Lviv. That was neither our fault nor the fault of the bands.
Two agencies that took responsibility for the organization and promotion of those concerts showed their total unreliability.

The first one was “Лінія Втечі” responsible for the show in Lviv.
We fought for that gig till the very end, changing our conditions, agreeing to everything that we were forced to agree just not to cancel the first concert on tour. Contact with the agency was very sporadic all the time and without the final consultation with us they canceled the show totally cutting off the contact with us. We couldn’t do anything - we tried to move the concert to another club and work with other promoters but the time was too short. We were forced to wait one day longer with the bands in Krakow before we could start the tour. So we would like to inform all the bands and agencies that they should be careful before entering into any agreements with the “Лінія Втечі” agency from Ukraine.

Concerning both concerts in Kazakhstan – the promoter “Свинцовый Дирижабль” agency or as it also called “Zep Concert” didn’t buy the flight tickets from Georgia to Kazakhstan on time, postponing the purchase until the very last moment, therefore not fulfilling the terms of the contract. Organizing such trips by air, everything must be booked and purchased in advance, but unfortunately the lack of professionalism and responsibility on part of the promoter from Kazakhstan made it impossible.
In the end the price of the airline tickets increased almost x3 times and at the final moment the promoter could not afford that amount of money.

As Creative Music agency, we were already decided to cover some of the tickets together with the promoter from Kyrgyzstan, but unfortunately “Свинцовый Дирижабль” (“Zep Concert”) couldn’t afford even the half of the tickets.
As the gigs in Kazakhstan and Kyrgyzstan were logistically connected the promoter from Kyrgyzstan – Kuturgan Concerts, was forced to cancel his show also, but he desperately tried to save the concert in his country in any possible way. So after long deliberations with him and Vader band, we came to the conclusion that we will make it happen, play on completely different terms and together with “Kuturgan concerts” we paid for the new tickets from Tbilisi to Bishkek and played the show there.

With just one day at our disposal, we managed to fly from Tbilisi through the Arab Emirates to Bishkek and the day after we could perform in the capital of Kyrgyzstan.
It has proved to us that there are promoters and concert agencies in such exotic countries that in terms of professionalism, organization and hospitality can surpass even some of the most experienced agencies in Europe.
We want to express our special gratitude to Арсений Жердев (Arseny Zherdev) and Kuturgan Concerts!!!
We are very happy that we could do it together and save the concert in your beautiful hospitable country! At the earliest opportunity we will return there!

And for the fans from Kazakhstan we will try to do it again with the competent concert agency from your country.
We would like to thank all the people without whom these shows would not be possible. Thank you for hospitality and willingness to undertake the organization of these concerts and the fulfillment of the obligations: Юрий Степанищев and Игорь Евтушенко (Igor Evtushenko) (Black Sea Concerts) and Вадим Дятлов (Vadim Dyatlov) (TRM concert agency) from Ukraine, Iura Grom (Grom Booking Agency) from Moldova, Arsen Hakobyan (Zhesht Events) from Armenia, Givi Machavariani and Terence McNamara (Locomotive Promotion and RedRum) from Georgia, Арсений Жердев (Arseny Zherdev) (Kuturgan Concerts) from Kyrgyzstan, Tolga Sert (Retro Yapım) from Turkey, Franz Martin, Alexander Hartinger and all the Rockhouse Bar crew from Salzburg (Austria), Jürgen Wittmann & Tanja Wittmann and the whole L.A. Cham crew from Cham (Germany), Rene Göttsching and Bandhaus Leipzig.

Of course huge thanks to the bands participating in this tour: Vader - indestructible till the very end and as always in great shape on stage and beyond, THY DISEASE - who supported VADER on all the shows and in between; and Kris Kurowski for taking care of the sound almost every day, Grzegorz Zysiek for the sickest lights and smoke on the last three shows.

Now it's time for a well-deserved rest after the two intensive tours.

You will soon find out about another crazy CM concert mission in faraway places.