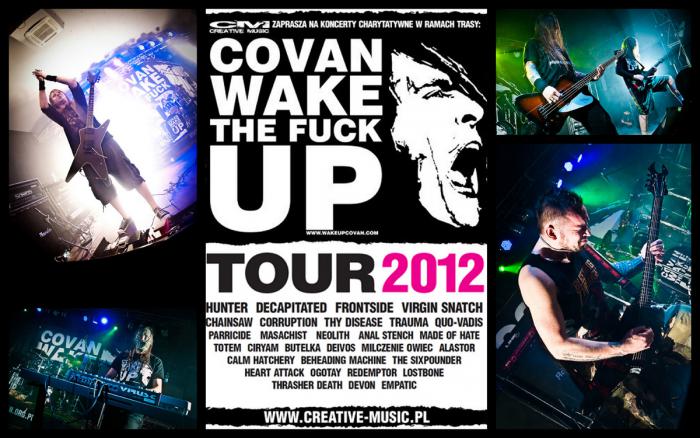 Covan Wake The Fuck Up Tour successfully reached it's end.
And it's literally, because Adrian was watching almost the whole gig in the first row near the barriers together with the audience!!!
And this evening will stay unique not only because of the number of people of good will but also because we've collected a large sum of money for both: the ticket sales and the sales of the special merchandise collection!
The true atmosphere of one big family, hundreds of fans and awesome show in Krakow were filmed for the upcoming DVD, total income from its sales will be used for Adrian's rehabilitation.
We are also very happy because of the huge media interest, which was reflected in dozens of interviews for radio and television.
Adrian is in the hearts of all of us and the circle of help and support becomes larger and continues to grow!!
We must say thank you not only to the bands and musicians who in any way have taken part in this exceptional tour, but also to all the clubs in Poland, which were doing their best to support Covan Wake The Fuck Up Tour.
Huge thanks also go to: Interia, Sema Print, 3 King Media, Mystic Production, Antyradio, Rockmetal, Gitarzysta, Perkusista, Redshift Studio and Red Pig Production for invaluable help, Music Info for the necessary minimal supplies for the musicians of Virgin Snatch and Thy Disease, and Miron Pro Sonus for giving the possibility to the audience to listen to us!
Let us also listen to what Adrian's family would like to say:

'We wanted to say thank you for coming to these shows to all the fans of the music, which Adrian loved so much, and to which he completely devoted himself.
Special thanks to Creative Music and Darek, who has put so much energy and devotion into 'Covan Wake The Fuck Up Tour', as a musician and as an organizer at the same time.
Without him there wouldn't have been so many great musicians on stage and 33 bands in one tour.
We could feel this positive energy on all the concerts!
And we've seen how many real friends Adrian has.
Thank you so much for being there and for performing for Adrian!'
At the same time we would like to inform you about the bidding on the auction on www.allegro.pl of a banner from the gig in Zabrze (size 1m x 2m), where the following bands were performing: Frontside, Virgin Snatch, Thy Disease, Totem, Anal Stench and Devon.
The entire income will be transferred to Adrian's family.

We have good news for those, who due to different reasons couldn't come to the gigs.
There will be next parts of that tour and probably in different parts of the world! If you're still not convinced in the necessity of this unique 'rescue enterprise' we invite you to watch the report, prepared by journalists of the Krakow Chronicle and TVP

THE STRUGGLE FOR THE COVAN'S RETURN IS THE FIGHT FOR THE BEST INSIDE US!!