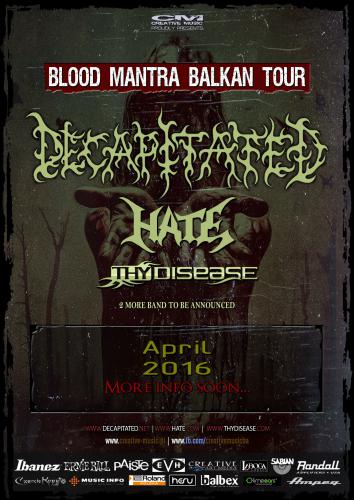 The headliner will be DECAPITATED, who very intensively promote their latest record Blood Mantra released by Nuclear Blast in the previous year.
The tour will take place immediately after the series of concerts of Decapitated in the United States and Western Europe, so expect them in their top form!
Besides, DECAPITATED will be accompanied by two bands from Poland – extreme metal crusaders HATE – with their newest release entitled Crvsade Zero [Napalm Records] and THY DISEASE, who keep promoting their album Costumes of Technocracy [Mystic Productions].

Soon we will inform you about all the dates and cities where this devastating raid will take place!