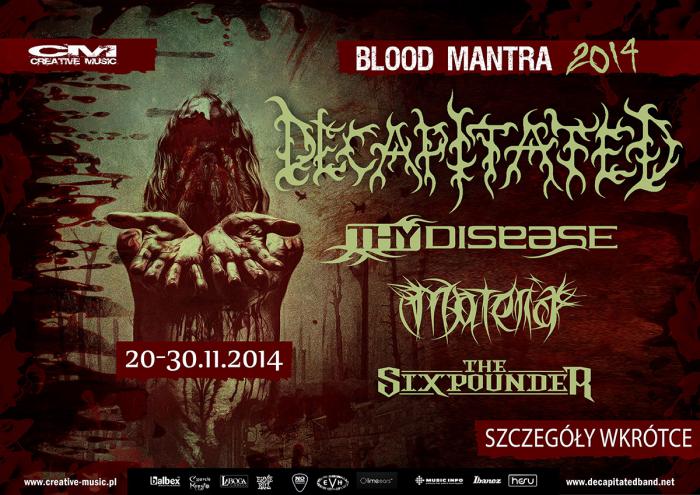 We are greatly pleased to announce a tour of leading band of the Polish metal scene - DECAPITATED. A series of concerts during Blood MantraTour 2014 will promote the latest album, which will be released on 22/09/2014 by record label MYSTIC PRODUCTIONS in Poland and 26/09.2014 by NUCLEAR BLAST worldwide. This is the first promotional tour in the last four years, where the band will perform as a headliner, presenting songs from the upcoming album!

During Blood Mantra Tour 2014 DECAPITATED will be supported by three bands. The first is the THY DISEASE, that currently promotes, released earlier this year, their sixth album. Another participant is MATERIA - the finalists' of "Must Be The Music", that actively participate in many concerts around the country and THE SIXPOUNDER - deserved group, which lately played at this year's Woodstock.

DECAPITATED prepared a special live set composed of the biggest hits, enhanced by songs from the latest release. Moreover, unique concert visuals are being prepared, along with special merchandise t-shirts with new models based on graphics designed by Łukasz Jaszak.

Soon we will announce detailed dates and cities that we're planning to visit. Because of the large number of DECAPITATED gigs overseas, first part of the tour will be held in novermber, while rest of the gigs in the cities not visited this fall is planned for the first half of 2015.

DECAPITATED | THY DISEASE | MATERIA | THE SIXPOUNDER