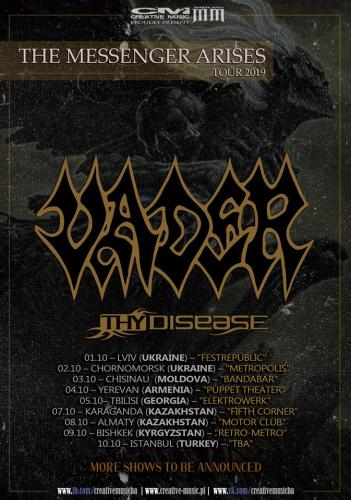 VADER is not slowing down!!
Right after the Scandinavian raid and several shows in Poland, on the 1st of October the band will attack again, this time delivering its firepower to the East and Asia invading some of the places for the first time in the band’s history!
VADER will present new tunes from the recently released EP "Thy Messenger" and the upcoming full album! Of course the band's classics from its whole 35 year career will not be missing either.

The invincible war machine will be accompanied by its countrymen, THY DISEASE, who are going to release their newest 7th studio album in September.

The shows will take place in Ukraine, Moldova, Armenia, Georgia, Kazakhstan, Kyrgyzstan, Turkey, Greece and some more countries which will be announced later.
Below you can find the confirmed dates and cities where our touring line up will appear.
More shows to come! Stay tuned!