SADIST and THY DISEASE will invade the East together! 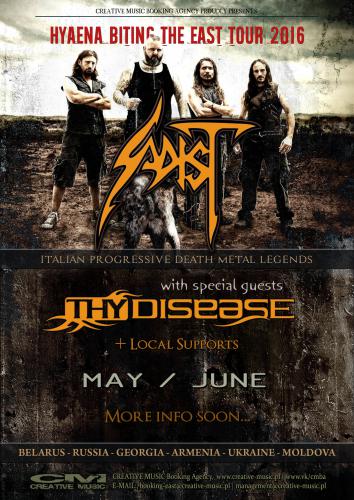 With a great pleasure we announce another tour of Italian death metal legends - SADIST!!
Under HYAENA BITING THE EAST TOUR 2016 sign the band will be promoting the latest album which has been released 16 October 2015 via SCARLET RECORDS. It is worth mentioning that band already visited ex-USSR territories 5 years ago and brought a lot of attention there.

On HYAENA BITING THE EAST TOUR 2016 band will be supported by polish industrial groove metallers THY DISEASE who intensively promote their latest work - Costumes of Technocracy album released in early 2014 via Mystic Productions. For this occasion SADIST are preparing a very special setlist, which will consist of their greatest songs, including the ones from the newest album. Full list of countries, cities and clubs will be announced shortly. Stay tuned!