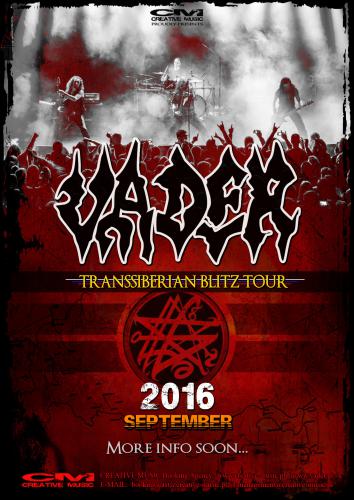 We did not have to wait long for another visit of Polish death metal ambassadors to our eastern brothers.On the 1st of September VADER will start the next Blitzkrieg in the East promoting the new album “The Empire” which will be released this fall by Nuclear Blast. And the faithful and devoted fans from Russia will be the first who will be honored to see the new material live and we will present the details about it very soon. This tour will reach the most distant places in Russia and even cities were the band hasn’t been before. The set list will consist of absolutely new tracks but you can be sure that there will be classics from the entire discography of VADER.

Whereas in the summer holidays there will be released an EP with new sounds as a foretaste of the forthcoming album.

In a short time we will announce the detailed schedule with all the dates and cities which VADER will visit immediately after the festival season.