Decapitated, Thy Disease, Materia and The Sixpounder will continue their tour in Poland next week ! BLOOD MANTRA TOUR 2015 will visit eight cities across Poland.

See you there soon!

Good news!! In the beginning of spring 2015, precisely in March, Polish band THY DISEASE will set off on an Eastern block tour in the first instance visiting countries like: UKRAINE, BELARUS, MOLDOVA and ROMANIA. This tour will be promoting their latest sixth album - Costumes of Technocracy, which was released in early 2014 via MYSTIC PRODUCTIONS.

Hammer and Togs Tour and Promotion and Stage 2 Stage in assosiation with Creative Music are very pleased to announce another tour outside teritory of Poland. OBSCURE SPHINX and THY DISEASE are to join their forces to hit the Balkans in April 2015 under VOID OVER THE BALKANS 2015 sign! The tour will visit such countries as: Czech Republic, Slovakia, Hungary, Romania, Bulgaria, Serbia, Bosnia and Croatia. All dates and venues where you can see the bands will be announced soon!

At 30th November in Estrada venue in Bydgoszcz we’ve finished the first part of concerts under the name Blood Mantra Tour! During the first part the crews of Decapitated, Thy Disease, Matter and The Sixpounder visited 11 cities in Poland. We’d like to thank everyone for your attendance, support and great atmosphere! Greetings to all teams participating in this project, the technical team, all the clubs and promoters! 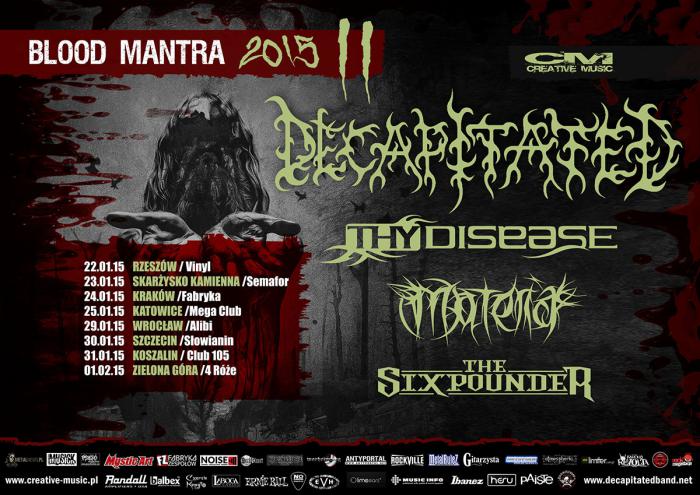 As we announced before, second half of polish BLOOD MANTRA TOUR 2015 will take place in January 2015! We will hit all the places and clubs we missed in first part of the tour in 2014.

On the Mantra Blood Tour 2014 DECAPITATED will be supported by three bands - THY DISEASE, promoting their newest album released earlier this year, MATERIA - the "Must Be The Music" finalists' and THE SIXPOUNDER which lately played at this year's Woodstock.

Decapitated, Thy Disease, Materia and The Sixpounder will begin touring in Poland in less than three weeks! The first part of the tour will include 11 concerts, while the second part will take place at the end of January 2015 – dates to be announced soon! Here are dates and places where you can catch Decapitated in November and where can you get tickets. You can find running order and all other details in facebook events listed below

See you there soon!

Creative Music and Klub Rotunda have great honor and pleasure to invite you all for a really remarkable event, which is the fifteenth birthday of Thy Disease!

Jubilee of the formation will take place on December 19th 2014 in their home city of Krakow. The band will play songs from all six albums, while additional attraction will be performances of special guests, who contributed to all of the band’s line-ups!

We're happy to inform you that this year Halloween is going to be so metal! Thy Disease along with Materia will play three shows in northern Poland! See you in following places:

Are already known to the cities and the dates of the November gigs of the polish metal scene leading representatives - DECAPITATED.

A series of concerts under the banner of Mantra Blood Tour 2014 will promote their latest album, which will be released on 22/09/2014 by record label MYSTIC in Poland and NUCLEAR BLAST 26.09.2014 in the world. This is the first polish promotional tour in the last four years, where the band will perform as a headliner showing the songs from the new album!

We are greatly pleased to announce a tour of leading band of the Polish metal scene - DECAPITATED. A series of concerts during Blood MantraTour 2014 will promote the latest album, which will be released on 22/09/2014 by record label MYSTIC PRODUCTIONS in Poland and 26/09.2014 by NUCLEAR BLAST worldwide. This is the first promotional tour in the last four years, where the band will perform as a headliner, presenting songs from the upcoming album!